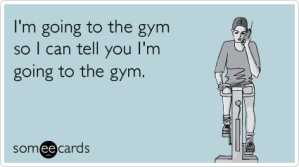 So my at home fitness plan isn’t going as well as expected. 😦 It wasn’t totally my fault but I admit I was derailed by laziness and end-of the month eating shenanigans which included outings, a wedding reception and my own wedding anniversary which brought its own version of calories, carbs and fat in the form of a guiltless,well-deserved Italian dinner. My mom was measuring me the other day to sew some work clothes and I (secretly) balked when she wrote down the sizings. Not to mention  pair of pants that I haven’t worn in a while left me doing the skinny jeans wiggle to get into. I didn’t need much encouraging to realize that I needed to kick myself into high gear and (finally) haul ass to the gym.

I hate the gym. I hate the grunting and people pretending not to scope you out but who secretly throw glances your way.  I hate the fight down for machines. I hate the clanking of weights by the men and I hate the post-workout selfies by the women. IT BLASTED ANNOYING!!!…….but I started back. One evening last week, I gave in to desperation and thankfully I wasn’t going to train that day because I was severely startled by the SHEER AMOUNT of people there that afternoon. Why de hell it had so much people (women) there was beyond me but I figure it has something to do with the fact that Carnival bands launch already and clearly this year’s theme across the board is “Hail to the V”:

And well of course……

(Photos courtesy Trinidad and Tobago Carnival Costume Photos. For these and more check the page on Facebook here.)

I am sitting out Carnival next year.

So I’m back in the saddle for my own personal fitness and in order to avoid the sycophants, I’m going to the gym in the morning from as early as 5 a.m., a feat never done before but I’ve accomplished three days of rising and getting there by that hour and I’m damn proud of myself. Additionally I don’t feel the pressure in the day to train in between seeing about the gremlinz. The only thing is that when I start back work in September for the new school term, I may have to go even earlier. I have help though. The following video wakes me up every morning. I grabbed the audio and set it as my alarm so I’m roused from sleep by one of the most motivational get-it-done-now exercise speeches I’ve ever heard in my life.  Take a look:

I think at some point my husband will get annoyed hearing this every morning but doesn’t it make you feel like instantly bursting a sweat? I’m getting it done man!

Been a while but life is getting in the way of my blogging. Thankfully things are getting back to normal so more time to write….yayy! I have  a greater respect for you guys who do this everyday sometimes twice a day!

This afternoon I reached home relatively early with Son-son (Mam’zelle was with hubby) and proceeded to faceplant on my bed thinking he would occupy himself until his sister came home. He had other plans and kept bugging me to go out and exercise, a task I have duly entrusted upon him….to bother me until I feel guilty enough. He’s very good at this particular task so after all the complaints and suggestions using reverse psychology we were on our way around the block.

I don’t mind walking in the neighbourhood with him. It’s residential enough and he can keep up with my brisk walking since I still don’t do running well (it’s a work in progress). If it were Mam’zelle I would have to endure the endless ‘I tired’s, ‘my foot hurtin’s and ‘dogs barking at meeee!!!’s so I was thankful in that regard. We ended up in the park with the bolted exercise equipment that are found in open spaces in most parks all over Trinidad and I decided to concentrate my workout there. In the meanwhile some other young boys surfaced with the footballs and well you know what happened next. While I’m trying to navigate a rowing machine I felt the tap on the shoulder. Without looking around I said go ahead since they were within distance anyway. At the end of my sweat I decided to stop thinking about time and what I was going to cook, wondering if hubby reached home but passed the next way, and focused on sitting and looking at him interact and kick ball with random boys of average age.

The following thoughts came to me:

Maybe I’m a tad paranoid, I can’t even stomach seeing little children travelling by themselves on the road.

I soon called my son off the pitch after he was thoroughly drenched with sweat. He was smiling and happy and his new ‘pardners’ waved his goodbye. But I still felt wary leaving them there. I guess there is safety in numbers and the neighbourhood isn’t a ‘bad’ one, but nowhere is immune these days. So many things are happening to children these days in Trinidad. We are witnessing a definite spike in children’s accidents deaths for various reasons ranging from fire to drowning. Many say parents need to be more responsible, others say there is evil stalking the land because of the current climate….whatever the climate is. i’m inclined to believe both.

Truthfully I wish the climate could return to how it was before, but before when exactly? Can anyone pinpoint exactly when ‘Trinidad was nice’ and ‘tings was nice?’ When was the tipping point?

I’m an advocate for simple joys and playing football in the park with a crew you’ve just met definitely falls into that category.  Shouldn’t that be an experience that is pure, carefee and without worry about possible negatives based on the way things are going on now in society? I want that for my gremz, I want that for your gremz too, they deserve it. At the end of the day though I can’t help switching on the TMDIM valve:

Carnival ended a while back and with it ended my dedication to a set fitness regime. I love the gym but I have no patience for the gym-rats and especially at Carnival time where everybody swallows the same pill to get the same magical result. Their on-season is my off-season so like my church on Christmas Eve or a  New Years Eve, I happily give up my place for another. It’s now on-season for me again but somehow I can’t find back myself. They say the hardest thing is to press reset right?

Yesterday afternoon husby was home to watch the gremlinz so I decided to go for a run. By “run” I mean walk very fast to give the illusion that I am running. I really wish I could run though, people who run 5Ks make me nervous. I even placed a half-marathon on my bucket list! One day…. Anyway, at the savannah in my neighbourhood,  this elderly gentleman who kept running past me over and over drenched with sweat gave me the resolve to again get in the game. I don’t know if it was inspiration or pure unadulterated shame but I’ve decided to restart my fitness regime.

Now I don’t want to lose a setta weight eh. I just need a decent sweat once a day to keep the body inna order and to keep the health in check. Mommies hadda look sexy right? 😉 But because of my responsibilities and the fact that I can hardly carve out an hour for myself on a weekday afternoon/evening/night, I have decided to create a home gym. Now the definition of gym here is used very loosely as it technically consists of a table, a mat, (2) 5-pound weights and a laptop chock full of exercise videos from the internet thanks to the fine folks at YouTube. Voila! 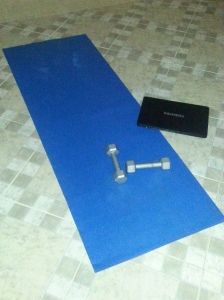 I landed upon a YouTube channel BeFit http://www.youtube.com/user/BeFit which has so many top shelf exercise videos across the span of workouts from Jillian Michaels to Billy Blanks to Jane Fonda! So I figure I will (try to) get up early some mornings before I get ready for work and do some yoga, some core in the evening, lower body one day and upper body another day, mix it up a bit. I’m starting slow but increasing stamina and strength and all from the comfort of my living room so I have ZERO excuse. Peep the yoga video here: http://www.youtube.com/watch?v=q5nyrD4eM64

Maybe for whatever reason you find it hard to get out and exercise, take a look through the YouTube channel and you may see something you like. You can save videos to your device using sites like http://www.savetube.com for a starter and once you get in the groove, you can amp it up to suit you.  I still plan to try to run. I want to see if I can actually make the whole rounds of the savannah, but when I move from “walk fast” to jog, we’ll see how that turns out.  Maybe I will eventually catch up to Pops and pass him straight, who knows? I sure as hell won’t be holding my breath.