I say this purely from a perspective of observing them in my role as the bridge between them and the grandchildren and when I say strange I mean howww is this sharp 180 possible from you being one type of human as my parent to being another type of human as my child’s grandparent? I continue to ponder… 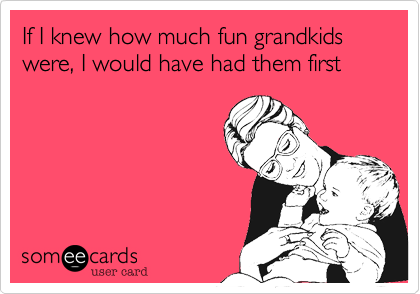 Years ago when I heard the above quote on a tv show I laughed at the humour in it. Little did I realize later on in life when I created the grandchildren, that the joke was actually on me because grandparents mean every single word of it. Hurtful.

Did you read any of these and say to yourself ‘Yessss” or “Preachhhh”? The contrast is glaring and some things are indeed very funny while others are cold blooded man! Like where was this side of you when I was growing up?!?!

I suppose it’s a case of who feels it knows it and I know that there may be other deeper matters related to insecurities and self-confidence, change in society and wisdom that comes with age and all that but I’m keeping it light for now.

In the meantime, I continue to be flabbergasted by the strangeness of the grandparents. Are you?
Blessings